To owners Beth and Brenda Hubbard, it seems like just yesterday that we celebrated our 50th anniversary of the farm! Both sisters are old enough (barely!) to remember when the family moved to what was originally “Fabius Farm” and Corey Lake Orchards debuted! 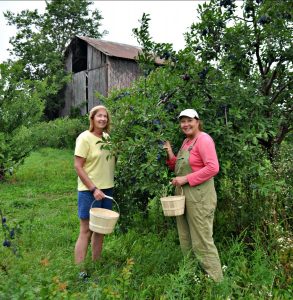 The farm has dramatically transformed from a commercial fruit farm selling to food processors and wholesale outlets to today’s popular market, with an onsite distillery, winery, cidery, cider mill, bakery, and authentic play and relaxation areas. Over 150 acres are farmed mainly for the farm market providing an abundance of fresh fruits and vegetables picked daily. We also source additional produce, gifts, and grocery items from over 20 local vendors and neighboring small farms.

Below is Dayton’s hand painted sign for the market – still in use. 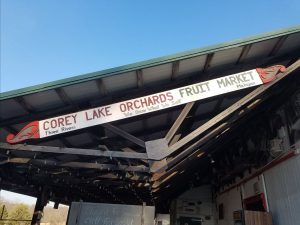 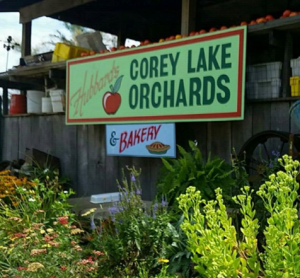 Things Change, Yet Remain the Same

Looking back over the past six decades, the world and the agricultural industry, as our family has known it, has changed in ways we could not have imagined. Examples include increased government regulation; heightened consumer demand for fresh locally grown produce; growing popularity of agritourism and u-pick; improvements to integrated pest management techniques; new varieties of produce that can withstand weather and pest issues; advances in technology; and better farm equipment. What would our parents and founders, Dayton and Allene Hubbard think about the erratic weather, the social media we use and even how the farm changed with the pandemic?!!

As much as things change, they still remain the same. Running a farm takes hard work and dedication. We are blessed to have a talented and loyal staff, some have worked for us for over 20 years. The next generation has stepped up to sustain the vision and continue the legacy. But on any given day, it is still hands-in-dirt, sunrise to sunset, constant battles with weeds, worms, and weather, and a 24/7 dedication to nurturing the business. And our most important constant is a dedicated customer base that extends to second and third generations! We are so grateful for your support, loyalty, and friendship over the decades. Thank you for growing with us!

Join us in the celebration! Watch for “60 Anniversary” specials throughout the year and historical throwbacks from earlier decades.

From everyone at Corey Lake Orchards

Below are some of the most notable events during our past six decades.